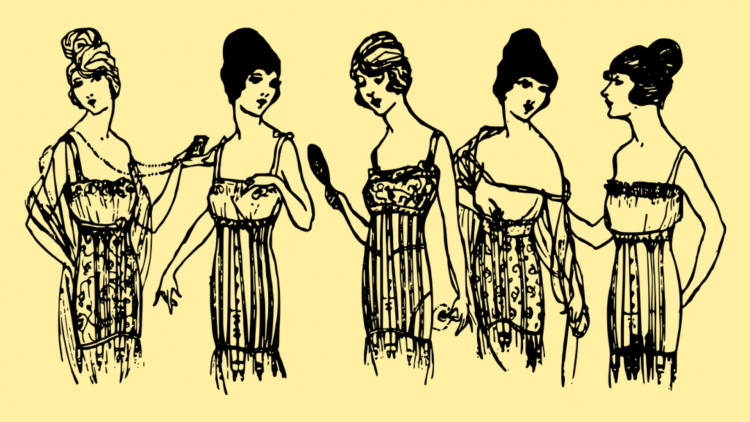 EPISODE 1: THE SECRET BEHIND THE WHALE BONES

Hello fellow readers, my name is Cristina Souto Caviglia and among a lot of things, I happen to be a menswear fashion designer, but well if you really want to know a bit more about me … it’s 2020 just google me up or even better search me on Instagram (yes sorry, I am a millennial, so I take every publicity chance that I get). Now back to what I am here for: talk about fashion and feminism, and in this particular article about Paul Poiret’s Kimono dress and its effect in feminist history.

At first sight, when you think about fashion now a days and what the mainstream media mass fashion has become, the question that might pop into your heads is, how can fashion be related to feminism when its indeed the first industry where women are most put down and treated like objects?

Of course before him there were already women that were ahead of their times and got rid of it before Poiret came to the picture, but what this designer did is crucial because he was supported by the most well-known families around the world, which meant that what the women of this families wore will dictate the course of how the rest of the woman would dress all around the globe. And why the official abolition of the corset is so important in feminism?

The corset, that came into trend around the 1550’s thanks to Catherine De’ Medici, was a mandatory piece of garment in a “proper” (in between quotation marks because what a proper lady is could lead us to a whole other article) ladies look. As the official definition of the word says: “A woman’s tightly fitting undergarment extending from below the chest to the hips, worn to shape the figure”.

Here is when the problem starts, well the corset is a garment that in order to embellish the woman figure, also incapacitates her body to move properly, breath properly, even in the most extreme cases create a malfunction of the vital organs like the heart or the digestive system. You are by now starting to get where I am heading to, aren’t you? With being obliged by society to wear such an instrument, how on earth were women going to be able to be as powerful as men?

Just to bring a bigger picture, these corsets were usually made of metal rods or whale bones, that will be wrapped around the women’s bodies as hard and tight as possible for all day long. It was of course normal that these women were not able to walk for long distances, will faint with higher temperatures and in general will not be able to perform everyday activities. All of it giving as a result that women were considered less capable, or “the weak gender”.

It is indeed when woman started to free their bodies that feminist movements gain more and more power around the world. The same year that Poiret invented the kimono dress, 1903, one of the first feminist movements was officially established: The Suffragettes. The Suffragettes, were the women that militate the only woman’s political organization “Votes for Women” created by the English activist Emmeline Pankhusrt. Their main goal was to fight for the right to vote in Britain’s public elections. And it quickly spread all around Europe and then the rest of the world. If you want to know about this huge feminist historical movement, I suggest you read Emmeline’s words itself in her book: “The Suffragette Movement: An intimate account of persons and ideals.”

So, in a few words, a lot of the times in history fashion has been used as a weapon to make the woman gender weaker, let’s never forget that thanks to Poiret we got one step closer to achieve equality between genders, and let’s keep on fighting for that to really happen!

Cristina Souto Caviglia (borned in 1994 in a small village in the Basque Country, Spain) is a menswear fashioner designer. In her CV we can find brands like Fendi, Louis Vuitton, Carolina Herrera, Woolmark Company or Hugo Boss where she is a former designer inside the Boss Casual team. After finishing her degree in IED Barcelona she moved to Florence to complete her studies with a Masters Degree at Instituto Marangoni. Currently
she lives in the small town of Metzingen in the south of Germany.

Enthusiastic about bringing communities together, she joined European youth “Community Program” in Belgium and was part of her hometowns “Agenda 21 by the Kioto Protocole”movement. Moreover she created “Siamo Fatti Cosi” the open sex educational classes hosted in Florence and she took part in “Route Artlantique 2017”, a creative workshop journey in Senegal.